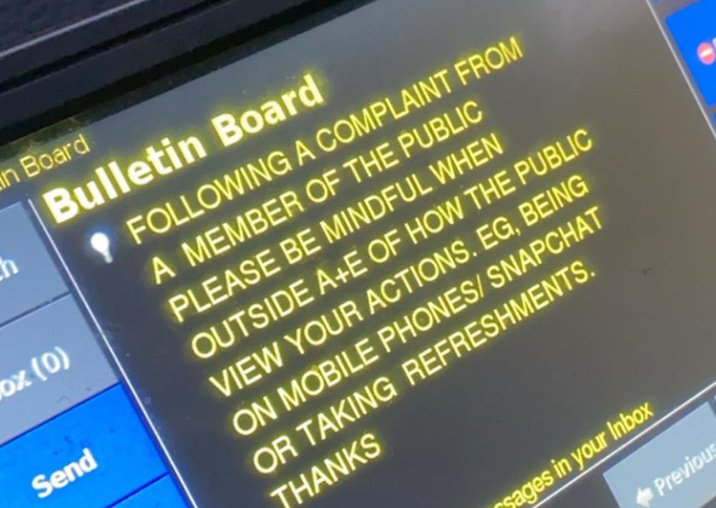 I’ve already spoken about ambulance crews’ dark humour and other coping strategies that they use. I mentioned how “normal” members of the public often don’t get it. Recently I was horrified to read an article relating to this.

It revolved around a message sent to ambulance crews, in their ambulances, telling them to “Please be mindful when outside A+E of how the public view your actions. Eg. Being on mobile phones/Snapchat or taking refreshments.”

Firstly, what narrow minded, uninformed person actually sent that message? Any member of any ambulance service should know what their staff go through. To send something like that to crews, while they are still on duty, is utterly thoughtless!

Secondly, the message began “Following a complaint from a member of the public…”. Whoever took that complaint should have put that member of public straight and explained what the crews actually go through on a daily basis and ended things there. It should never have made it past that first person.

There are blinkered people out there who think ambulance crews should go round expressionless and unemotional. Unfortunately robotics hasn’t progressed that far yet so the job is still done by humans, with emotions, and coping strategies.

Sometimes, after certain jobs, they just need to chat with a friend or a loved one, outside A&E, on their phones. Sometimes one of the few chances they get to drink coffee etc is after a job, outside A&E. Normally because they are so busy serving members of the public. They might even have been on their phone to a counsellor after a particularly traumatic incident.

Please don’t ever judge crews for being human. That “member of the public” probably had no idea what the crews they were complaining about had just dealt with. Maybe they actually just needed a break and a brew, perhaps they were taking the chance, between jobs, to check in with their loved ones they’d not seen for a long time because they’d been doing long shifts.

I hope the person who actually sent that message was suitably dealt with.

Finally, if you think I’m wrong, and if you think crews should behave differently, most ambulance services are usually recruiting – why not put yourself in their shoes and see if you are right.

Being part of an ambulance crew at a rural station frequently meant long journeys into the main hospital in the city. This often meant spending time in the back of the ambulance with a patient. If it was an emergency you were usually busy, and the patient was most likely unconscious. For a general admissions, the patient was conscious and it was our job to offer reassurance when necessary.

It was like being a barman inost situations – the patient would open up and talk about anything and everything. There was an unexplainable trust, like they knew they could tell you anything. Obviously there was the whole patient confidentiality that meant what was said in the back of the Ambulance went no further, but it was more than that.

I worked in a bar one summer, and I learned things about people because I was somebody they could comfortably share their problems with. Being in the back of an ambulance with a patient was the same.

Sometimes the patient was terminally ill. It was a privilege to be a listening ear to them. To help them by allowing them to get things out of their system to someone who was disconnected from their situation, but could still show sympathy.

Elderly people would talk of the changes the had seen, the difficult times during and after WWII. Some spoke of their experiences of war. Not as innocent victims at home, but as active soldiers involved first hand in the fight. I’ve spoke before of the heroes, not looking for glory.

But being in the back of an ambulance can also be a challenge. There are the aggressive patients – more than once I….”asked” a patient to leave the vehicle. There are some things that won’t be tolerated and, generally, if the patient is able to threaten the ambulance crew then they most likely don’t need their help.

I had many humbling experiences, I have many special memories of patients. It is very like being a barman, but a million times better!

This post is a tribute to two people, but it also applies to many others around the world. The ones for whom the job becomes too much and they see no alternative. The ones who the system fails to recognise and support.

We trained together, without their help and motivation I might not have been as driven as I was. Then we lost touch. I heard about them through another training friend, the one who found them. It had been thought through, and there was no going back. On reflection, there may have been warning signs, but we deal with death and dying every day. We’re supposed to be immune to it, or so people think. Management don’t care, they are insulated from it in their offices. Forgotten by management, unknown by the public, never forgotten by us. One of us.

A trauma gp, a paediatrician, an anaesthetist… Those were a few of this person’s skills. They were trained to drive with systems by the Ambulance Service and they’d be on call for incidents involving trauma. Because they lived near my station we’d see them often at RTCs. When you felt their hand on your shoulder, and heard their voice, you knew everything would be ok. They didn’t take over, their voice usually said “hey, what can I do to help?”. That’s the kind of person they were. No one guessed there was a problem, until it was too late.

I’ll tell memories of both in later posts, this one is to remember them.

Gone, but never forgotten. To all the emergency workers who have passed away because the job got too much and the support just wasn’t there. Hopefully we learn from the tragic loss before many more die, saving other people’s lives….

Being based in a large rural area involving lots of farms, many patients were slightly older and had resided in the area for years, often decades. Older country folks are a special breed – they don’t like anything modern, or anything they don’t understand. They don’t like a fuss being made over them, they don’t like causing a fuss, and they certainly don’t like hospitals. Many times I heard older patients tell me they didn’t want to waste my time, more than once those patients were in the process of having a heart attack.

Working outwith the city also meant longer journeys into hospital, sometimes up to 40 minutes or more. That’s a long time to chat with the patient (assuming they are conscious!). Those journeys were either hard going or a great experience. Older people have usually seen a lot of changes in their lives, especially if they’ve lived in the same area for a long time. That was usually my conversation starter. Most patients loved to talk about the things they had seen, things they had been through. Most didn’t like to talk about WWII. I did, however, have one patient who got quite upset regarding the war.

I began with my usual “you must have seen a lot of changes in your lifetime?”. The patient agreed, then said “but I did things I’m not proud of”. It transpired they had been part of a special forces group and, although they couldn’t tell me what they had been involved in, they did tell me they had taken enemy lives. This was clearly upsetting to them. I pointed out that, despite the unfortunate circumstances, their actions had actually helped ensure my freedom, and that made them a hero in my opinion. “but I killed people!” they said with tears in their eyes. Humility is too small a word to explain what I was feeling. The person in front of me had suffered all their lives for their part in my safety and my right to live free from dictatorship! I listened to stories I can’t write here, all the way to the hospital. By the time we got there I was speechless. Most people will never know that patient’s part in their lives, or their courage, but I will never forget.

I met a number of genuine heroes in my time with the service, all humble and very un-hero-like. I will always consider it an honour to have met them, a chance to try to care for them as best as I could, albeit nowhere near enough to show proper gratitude.

All heroes, all unwilling to accept that fact. A far cry from some of the so called “heroes” we see on our TV screens now – footballers, pop stars…??

Most who had active involvement in WWII will no longer be with us now, but I hope they, and their effect on our lives, will never be forgotten by us or future generations.